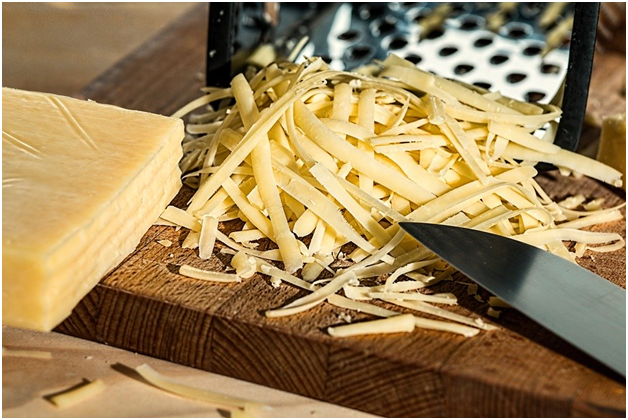 Differences between Shredded and Grated Cheese

Who doesn’t love cheese? Snacks or meals for a food lover cheese is the best thing to have on a plate. Use it as an ingredient in different dishes or eat plain; you can never get over the cheese obsession.

Although the primary ingredients required to make all cheese are the same, there are varieties of cheese available on the market. Cheese are classified according to their texture, flavor, age, preparation method, country of origin, and others.

But today we will be discussing shredded cheese and grated cheese. What is the difference between these two?

The term “shredded” and “grated” are interchangeably used by most of the people. To remove this confusion, let me briefly describe you. Shredded cheese means long thin strips cheese used often while cooking mac and cheese, etc. whereas a grated cheese is a tiny fragment which is powdery in nature commonly used as a topping on pizzas, pasta, etc.

Shredded cheese refers to the thin, long strips of cheese, which are made by pressing the cheese along the surface of a grater or a shredder. But before your shred a cheese, the block of soft cheese needs to be kept in a freezer for around 1 hr.

The most common types of cheese used to make shredded cheese are cheddar, mozzarella, and Edam. Shredded cheese often contains natamycin, powdered cellulose, and potato starch, which help the cheese to shred separately, preventing it from clumping. Usually, shredded cheese is used for Mexican and Tex-Mex dishes, and the blend of four shredded cheese used in Mexican cooking is commonly known as Mexican Shred Blend.

Compared to grated cheese, shredded cheese generally melts slower. It is used in mac and cheese, baking cheese scones, and sometimes as a topping.

Now, what is Grated cheese? It looks like powdered cheese. While soft cheese is used to make shredded cheese, to make a grated cheese, we need harder cheese.

There are usually three different methods to make a grated cheese. If you want to make grated cheese in the small quantity, you can use a Microplane. Just run the cheese on the surface of the Microplane and from another side, you will get grated cheese.

Similarly, if you want to make medium quantity shredded cheese, use a box grater. Like the Microplane, you need to run the cheese on the surface of the box grater.

And finally, for a large amount of grated cheese, a food processor works well. Make sure you cut the cheese into pieces before keeping them in the food processor.

If you want to enjoy the unique flavor of the cheese, It is always best to freshly grate the cheese rather than buying pre-grated cheese. Generally, parmesan and roman cheese are used to make grated cheese and is used as a topping.

While both shredded and grated cheese is technically a cheese but there are still some differences in their appearance, ingredients, method of preparation, and method of consumption.

2. Type and Age of Blocks

Shredded cheese is made of cheddar, mozzarella, or Edam cheese. On the other hand, parmesan or romano cheese is used to make grated cheese.

To make a shredded cheese we need a grater. And to make a grated cheese Microplane, box grater, or food processor can be used according to our requirement.

Looking for a company that would supply you with coffee?