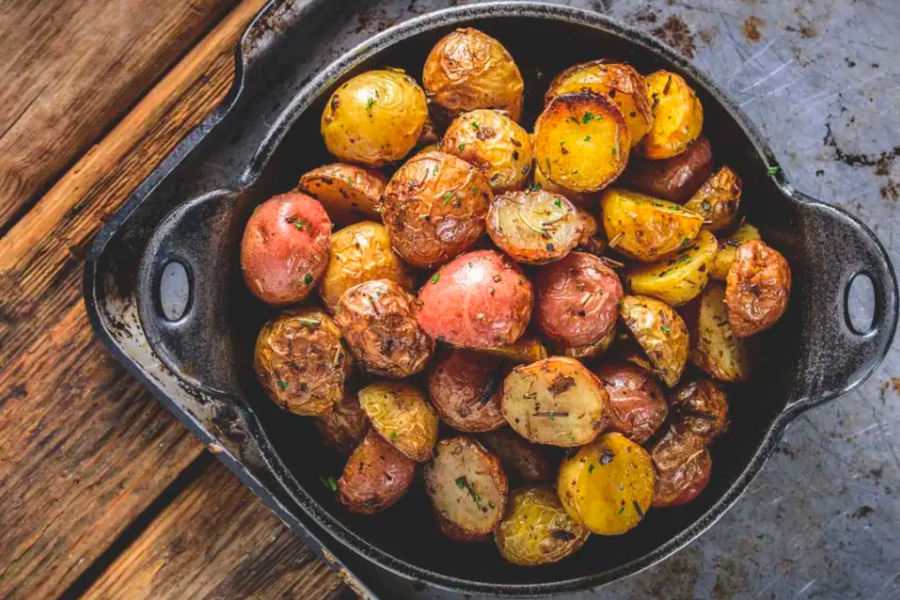 Potatoes are a popular cuisine that is also quite nutritious. Here is a primer on the health advantages of potatoes.

There are various ways to eat potatoes in the United States, where they are a highly popular cuisine. However, you may worry if they are healthful.

Potatoes get a negative reputation for being starch bombs, yet they are wonderfully healthy. Here is an overview of the potato’s health advantages and the most nutritious methods to prepare the food.

According to the United States Department of Agriculture, one medium-sized baked russet potato with skin has 129 calories, 4.6 grams of protein, no fat, 37 grams of carbohydrates, and approximately 4 grams of fiber. Additionally, the vegetable is rich in minerals, including 14.4 milligrams of vitamin C. The recommended daily allowance of vitamin C is between 75 and 90 milligrams.

According to a 2021 article published in the journal Nutrients, potatoes also include vitamin B1, which promotes human growth and development, folate, which aids in the synthesis of red blood cells, and vitamin B6, which is beneficial for a variety of disorders, including anemia.

Additionally, potatoes are rich in antioxidants. According to the National Library of Medicine, antioxidants are a chemical that prevents cell damage, which may afterward prevent certain illnesses.

Potatoes are a fantastic source of fuel before or during exercise due to the carbs and minerals they provide.

Consider munching on a handful of fingerling potatoes or a small to medium-sized baked potato before your workout if you’re seeking a whole-food source of energy.

Along with fiber, potatoes also provide resistant starch. Resistant starch is a special kind of carbohydrate that the body cannot break down.

In addition to fat-burning resistant starch, potatoes may also contribute to weight management in another way. According to a 2018 study published in Nutrients, potatoes are often more filling than other starchy carbohydrates, such as pasta and rice. That implies eating potatoes makes you feel full, which can aid with weight management.

Does Not Adversely Affect Blood Sugar

Researchers tested a supper consisting of rice or potatoes and analyzed the participant’s blood sugar levels to determine whether there were any differences. Each meal had fifty percent carbs, thirty percent fat, and twenty percent protein. Before, shortly after, and then every 30 minutes for several hours, researchers obtained blood samples from the participants. In addition, the individuals wore continuous glucose monitors to check their glucose levels while sleeping.

The study discovered no statistically significant differences between the rice and potato preparations. In addition, the study indicated that potatoes do not affect the control of blood glucose levels. Therefore, experts determined that potatoes can be ingested by diabetics as part of a balanced diet.

Frying anything, including potatoes, is probably not the healthiest cooking method. But beyond that, you may be wondering if boiling or baking potatoes are more nutritious.

2020 research examined the effect of cooking techniques on the starch, vitamin C, minerals, and antioxidant content of potatoes. Potatoes prepared in “dry” ways, such as microwaving or grilling, retained more nutrients than potatoes cooked in “wet” ones, such as boiling or steaming.

In addition, leaving the potato skin on during boiling keeps more nutrients and prevents minerals from leaking into the water. Also validated by the study is that chilling potatoes after cooking enhances their resistant starch content.

Potatoes are extraordinarily adaptable. Enjoy them for breakfast as part of a vegetable scramble cooked with eggs or chickpeas, or slice them as the foundation for a frittata. Add fingerling, red-skinned, purple-fleshed, and sweet potatoes that have been cooked and cooled to salads or as a side dish or pre-workout snack.

Stuff baked potatoes in oven or sautéed vegetables and lean protein for supper, or include them in veggie chili, soup, or stew. Even sweet dishes such as smoothies, potato energy balls, and desserts such as potato cake and chocolate truffles can use potatoes.